We're shifting the line between
marketing and entertainment.

As audiences become increasingly adept at filtering out traditional ads, they've also grown more tolerant of ad messages embedded within the story. We're facing the most media-savvy generation ever. Treat them with respect. Remain authentic and they'll respond in kind. Fail to do so, and you risk losing them entirely.

The key to effective
experiences is involvement.

If people are no longer content to passively consume entertainment, they're certainly not going to passively consume marketing messages. Instead of pushing messages out to consumers, brands need to think about how to get audiences to engage with the message and spread it themselves. If you just want people to listen, they won't.

In an increasingly networked world, audiences seek meaningful connections, not only with the stories they care about but with each other. From friends to family to press, everyone wants to tell a great story, or better yet, be a part of one.

The Internet has fostered an expectation that people will be able to delve into a story at different levels of involvement. They assume they'll be able to immerse themselves in a narrative at will. The more committed your fans, the greater need to reward them--because nothing brings in new fans like an enthusiastic evangelist.

Audiences are primed for discovery.

The wired generation of today are social curators, cool hunters scouring the web and the world around them for new things to share. Information is today's social currency. When you give people new things to discover, not only will they spread it through their networks but it becomes their own. Do this and your audience will come looking for you.

The world is our stage.

Anything can be used to tell a story. From a 40 foot high mural to a usb drive, a phone number written in the sky to a hidden message in an audio transmission, giant crop circles to candy wrappers. Surprise your audience with the unexpected. The world is our platform. 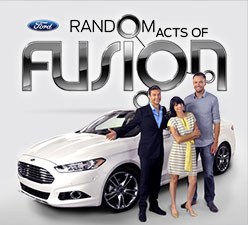